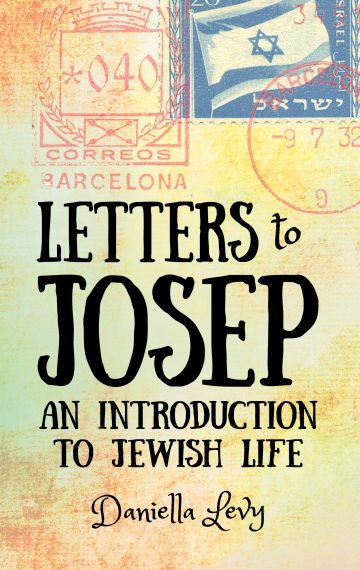 $13.95Buy from AmazonRead the Blog

What does it look and feel like to live as an Orthodox Jew?

Josep, a secular Catholic from Barcelona, wondered exactly that. And when he met Daniella, an American-Israeli Orthodox Jew, he had more questions than he knew how to ask.

Inspired by his curiosity, Daniella began to describe her faith and her life to Josep: from celebrating the Sabbath to keeping kosher, from the Hebrew calendar to the Jewish concept of the afterlife.

The result? This collection of amusing and enlightening letters. Daniella untangles the threads of a highly complex religion so accessibly that even the most uninitiated can relate. But she addresses difficult concepts with enough depth that the knowledgeable will find new insight, too. Every page resonates with the warmth, candor, and respect that characterize this unlikely friendship… served up with a liberal dash of humor.

Whether you’re a curious non-Jew or a Jew hoping to expand your knowledge, Letters to Josep: An Introduction to Judaism will charm, inform, and inspire you.

“You are about to embark on something more than a book. You are about to participate in a quest for friendship, understanding, and love, beyond language, religion, and borders…”

Praise for Letters to Josep: An Introduction to Judaism

“While for the most part, the book is light-hearted and entertaining, parts are also poignant and personal… Letters to Josep is indeed, as its title promises, an introduction to Judaism… But more than [that]… it is a delightfully entertaining glimpse into a deep friendship between two people of different faiths.”
– Yael Shahar, author of Returning

“In each chapter, Levy sprinkles gentle humor plus insightful, pithy, [wise] comments to convey easily and yet in depth the essence of being and doing Jewish. By the end, my own sense of what it means to be and to do Jewish felt clarified and justified… as short book that every Jew should read, as well as every non-Jew who wants an insiders’ glimpse into what [being] Jewish is about.”
– Susan Heitler, Ph.D., author of The Power of Two

“Although I have been observant for over thirty years and I’ve been teaching Torah for at least twenty, I was impressed with [Daniella’s] skillful, conversational method of explaining even the most basic of areas of Judaism… so straightforward, even simple, that it’s beautiful and enlightening. I can see myself recommending [this] book to many people.”
– Sari Horovitz Hoffman, Jewish educator